Coronavirus Will Slow the Economy

Home » Coronavirus Will Slow the Economy

Coronavirus Will Slow the Economy

China is reacting to the threat of coronavirus with a series of measures. Some are designed to stop the spread of the virus as the individual, including encouraging family members to report potential cases to authorities. There are even rewards.

According to news reports,

“We have taken the most comprehensive and rigorous prevention and control measures against the novel coronavirus, many of which have far exceeded what the World Health Organization and international health organizations required,” Foreign Affairs Ministry spokeswoman Hua Chunying said Thursday.

She added that “sacrificing one’s family for all and putting the country before oneself has always been a spiritual hallmark of the Chinese nation, ingrained in our genes.”

The use of rewards for tips, however, has provided official endorsement for suspicions that have turned neighbors against neighbors.

In the southeastern city of Fuzhou, local authorities have offered almost $60 for information about people who have left their homes to buy necessities more than once every 48 hours or who have not reported contact with people from Hubei or Wenzhou, a virus-stricken city in Zhejiang.

In the eastern city of Tai’an, authorities offered a $190 reward for reporting people engaged in “illegal and criminal activities related to the epidemic.”

They even outlined rules for splitting the reward if multiple reports were made.” [1]

Business as Normal Is Difficult to Achieve

Other requirements are aimed at businesses. Some local governments, including Shanghai, for example, require companies to provide sufficient facemasks for their workers before they can reopen. These rules affect tens of millions of employees, perhaps hundreds of millions.

There are 24 million people in Shanghai alone and China only has capacity to produce 22mn facemasks a day. This illustrates the difficulty companies face in returning to normal operations and in meeting the government’s requirements.

When they do return to normal operations, they will have large losses to make up. Government officials offered insight how deep the slowdown is by providing specifics about domestic air travel.

“The total number of flights is only about half of last year, and the load factor is less than 45%. The passenger load factor of the same period last year reached 90%.

Judging from the scheduled data, the next week, that is, from the 13th to the 19th of the first month, the average booking rate is only about 30%, and the daily booking volume is equivalent to about 40% of the same period last year, plus Airlines have implemented a free refund policy since January 24, and passengers have refunded a large number of tickets.

As of February 4, the total number of refunds has exceeded 13 million. Based on the above data, we can basically judge this way.” [2]

Impacts Will Be Far Reaching

Economists with Wells Fargo summarized the damage to the U. S. economy. “While only a handful of cases have made it to the United States and the risk to the U.S. population remains low, many firms have extensive supply chain networks in China that may be disrupted by closures and quarantines.

Delays in shipments of key parts and components may cause manufacturers to curb output just as business was gaining momentum following the Phase I China trade agreement.

Manufacturers in the Pacific Northwest, Midwest and Southeast will likely feel the brunt of the impact, while firms that import parts and components from other nations may also be impacted because China has become such a large part of global supply chains.

Furthermore, numerous flight suspensions and a strengthening dollar could put a bigger dent in China-related tourism, which generates a significant amount of economic activity in states such as California, Nevada, New York, Massachusetts and Washington, D.C. Trade show attendance will also likely take a hit.” [3] 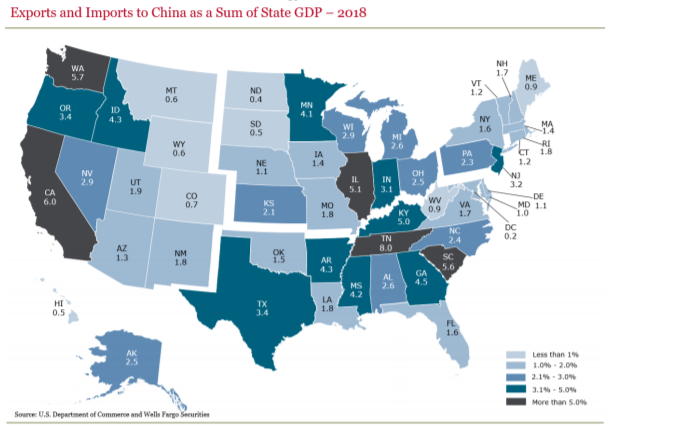 Specific industries will be affected more than others. Stock market investors should consider the risks of coronavirus when evaluating companies and consider delaying purchases if supply chains are at risk.