Stocks sold off on Monday. The S&P 500 fell as much as 2.6% before rebounding into the close.

And so the mainstream media pundits needed to fill the air with reasons why.

CNBC came up with five:

All things I’m sure you’ve heard about in the news, or know from simply being familiar with markets.

It’s always simple to find a narrative that explains why stocks are going down. However, these events are more often used to instill panic in financial news viewers than actually explain market conditions.

Is the Market Sell-off Here to Stay?

Let’s look at each of these reasons in close detail, and figure out whether these threats to the market hold any water…

There are certainly reasons to be concerned about China, the Fed, Covid, and Congress.

But the companies in the S&P 500 are reporting record-high profit margins. That’s bullish…

Investors have trillions of dollars to put to work in the stock market. That’s bullish…

And the first 5% pullback in over 10 months is likely to be viewed as a buying opportunity by investors with cash in their accounts.

For now, this looks like a buying opportunity to me, as well.

Chart of the Day:
As Goes This Stock, so
Goes the Market… 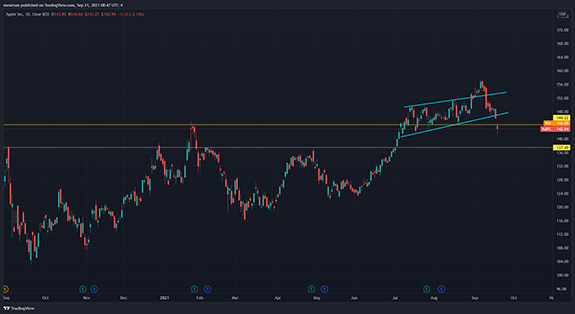 Today let’s take a look at Apple (Nasdaq: AAPL) in the wake of yesterday’s sell-off…

As I’ve mentioned before, AAPL stock is a strong barometer of the overall direction of the S&P 500. It alone makes up nearly 6% of the index.

So when AAPL makes a move, it’s likely that the broad market will move right along with it. And by studying the AAPL chart, we can get another view of the broad market’s risk appetite.

After briefly breaking out of an upside wedge pattern a couple weeks back, AAPL got smacked right back down into the pattern to retest the rising support yet again. The breakout turned out to be a fakeout.

If AAPL can hold steady and mount a rally in today’s trading, I can see it chopping around for the next week or so until the market decides what it wants to do. In my view, AAPL and the broad market will make a run at new highs before we can blink.

But if AAPL does lose its current support, it could fall all the way down to $137. As Mike said today, I would see that as a buying opportunity.