We have a new bubble on our hands.

Over the weekend, Barron’s highlighted a new bubble taking place in commodities. In an asset where bubbles are common.

“Uranium futures have climbed 40% to $42.50 in just under a month, according to FactSet data.

A renewed emphasis on climate change of late, following a number of extreme weather events across the world, has brought nuclear energy back into focus in recent months.

It has also caught the attention of retail investors and Reddit users, proving a popular topic on the WallStreetBets forum; another page titled ‘UraniumSqueeze’ currently has more than 13,000 members.”

While attention on Reddit is new, uranium has been popular among traders for years.

This is the ninth time uranium has entered bubble territory since 1990. (I’m defining a bubble as a price gain of at least 30% in a year, a gain that is well above the World Nuclear Association’s estimated annual growth rate of 2.3% a year.)

It is possible that this time is different, and the price of uranium will reach a permanently higher plateau…

Of course, it’s at least equally possible that the price of uranium will crash.

In other words, uranium is moving rapidly higher but there’s no assurance that trend will continue.

I know that sounds like a useless insight, but it’s not. For options traders, there is a specific trading strategy to benefit from that. It’s called a straddle.

Profit No Matter What Happens in the Uranium Bubble

Straddles are a trade on volatility.

They’re different than a typical trading strategy, where traders bet on directional moves. If you believe prices are going up, for example, you can buy a call option. Traders expecting a price decline buy puts.

But options offer much more than simple ideas like that.

Volatility is an important factor in options prices. Volatility premiums can account for more than half of the price of an option.

So when volatility is high, the dollar amount of this premium is high. As volatility declines, the premium falls. Selling a high-volatility premium is a way to benefit from the decline in volatility.

If you think prices will go up and volatility will decrease, it could be best to sell a put option like my friend Chad Shoop does. By selling an option, you can benefit from both the price move and an expected decline in volatility.

Options can also be used to trade volatility when you don’t have any opinion on the direction of the price move. A straddle is one way to do that.

With a straddle, you buy a call and put with the same strike price and same expiration date.

Since each contract covers 100 shares, this trade costs about $960 to open.

The maximum loss on the trade is the price paid to open the position — $960 per straddle. The maximum gain is significant if there is a large rally or sell-off in uranium by January.

The trade requires a move in URA, up or down, of about 36%. Based on history, once the bubble starts, a move of 36% is likely.

With a straddle, all you want is a price move. This trade lets you benefit from the bubble whether it lasts or pops.

Chart of the Day:
Will the Move in Uranium Last? 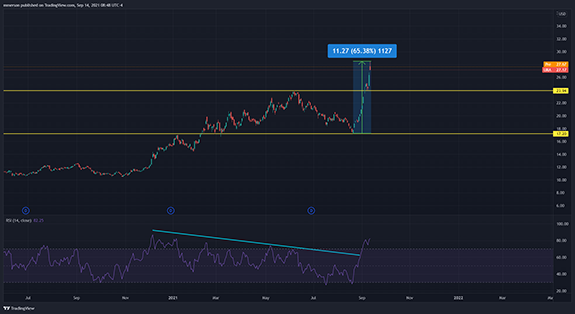 To build on Mike’s trade idea, let’s take a look at the chart of URA and see what other insights we can glean…

Just glancing at the daily chart of URA, it’s clear to see when uranium caught on as the latest Reddit meme target. The price diverged from momentum through June, where URA fell from its recent peak near $24. That divergence, in retrospect, would’ve made an excellent put trade setup.

But URA has spent the last month bucking its downtrend, gaining 65% from the local bottom. But as much as the Reddit meme has fueled this move, it’s actually been fairly healthy in my view. The price came back to retest the previous high set in June before continuing higher. That makes it less vulnerable to a full retrace of the past month’s move.

The RSI is still a bit overbought, so I’m expecting a period of brief consolidation before continuing higher. So if you’re bullish on URA in the short term, and want to play that move in addition to Mike’s straddle, I would suggest waiting for the RSI to come back closer to neutral before initiating a directional position.