Options Prices Are About to Change… Thanks to the Fed

Home » Options Prices Are About to Change… Thanks to the Fed

Options Prices Are About to Change… Thanks to the Fed

Powell largely confirmed that Fed officials hope to get away with doing nothing. The Fed doing nothing is about the best news the stock market could ask for.

We should learn just how little the Fed plans to do on September 22, after its next meeting. Then again, it will probably be slightly more than nothing. There’s likely to be some news about tapering — the word used to describe the end to the Fed’s bond-buying binge.

“Tapering,” funnily enough, is also used to refer to addiction treatment, where the substance is gradually removed from the patient to limit the painful effects of withdrawal.

The Fed’s use of the word “tapering” is an admission the market is addicted to easy money. To prevent the economic pain that would come from completely cutting off the addict, I expect the Fed to continue buying bonds for at least the next year. Though it will probably begin to buy less than the $120 billion a month it’s currently buying.

While the Fed will make traders happy by announcing a small change later this month, the good news is that the Fed won’t raise interest rates anytime soon.

Powell assured traders that the Fed would apply a “different and substantially more stringent test” for raising rates than they have in the past, for the “coming reduction in asset purchases.”

You see, this change will directly impact options pricing.

Options pricing models include a factor for interest rates. That’s because the models assume that market makers borrow money to facilitate trading, which is a sound assumption.

When we place a trade, there needs to be someone to trade with. That’s a market maker. They take the other side of our trade and then eliminate their risk with offsetting trades.

All those trades require capital, and market makers borrow money to trade. Collectively, they borrow billions of dollars every day.

Right now, it doesn’t cost much to borrow $1 billion. But that will change when interest rates return to normal.

Let’s give the Fed the benefit of the doubt and say inflation averages at 2%. In a normal interest rate environment, a one-year Treasury should yield at least 2.1% to compensate investors for inflation and provide a small return on investment.

As a result, options prices will change dramatically.

By my calculations, a call option with one month to expiration will cost about 50% more than it does now. This could force us to reduce the number of contracts we trade.

The Fed’s tapering could eventually lead to a sell-off in the stock market. But that is a minor inconvenience compared to what will happen when interest rates rise.

Unfortunately, this event is coming at some point and there’s nothing we can do about that.

When it does, it will affect how we trade. With that knowledge, we should begin preparing for higher interest rates now.

P.S. One interesting side effect of this coming change is that being an options seller will become far more profitable. It’s something every trader should be preparing for.

As it turns out, Chad is putting on an event all about options selling next week. It’s a free 3-day event where Chad will teach you everything he knows about exploring that side of the options market. Must-see education for the coming sea change in the options market.

The signup isn’t live yet, but you’ll want to keep an eye on your inbox for that invitation later this week.

Chart of the Day:
Upside Ahead for This Airline? 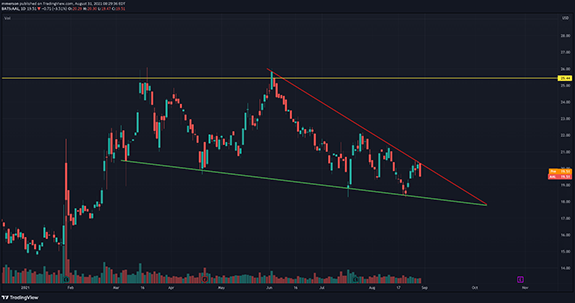 Just last Friday, I shared a chart of Boeing (NYSE: BA), noting it was in a falling wedge pattern. Patterns like these tend to resolve to the upside.

So when I took a look at a chart of American Airlines (Nasdaq: AAL) today, I was surprised (okay, not that surprised) to see it in the same pattern.

Airlines have understandably struggled the past couple years. The initial shock of lockdowns devastated the industry, and the on-again, off-again we’ve seen this year hasn’t helped matters. But I still see a lot to like about these stocks as a trader.

First of all, the trading plan for AAL is clear. Buy calls when it touches the green uptrend line, and sell them/buy puts when it hits the red downtrend line. Rinse and repeat until the pattern breaks definitively.

But also, take a look at how AAL acts around earnings reports. There was a lot of speculative bullish activity before the February and July earnings reports, as traders try to gamble on positive earnings blowouts.

Getting in position a week or two before AAL’s next earnings date at the end of October is just another way to trade this stock once it escapes the falling wedge pattern.