A Reality Check for Everyone Expecting to Retire

Home » A Reality Check for Everyone Expecting to Retire

A Reality Check for Everyone Expecting to Retire

Retirement is part of the American dream. But there’s more to it.

The dream is to reach a financially secure retirement.

Many years ago, financial planners said that such security came from a three-legged stool.

Social Security was one leg. Pensions were the second leg. And investment gains funded the third leg.

Now, the first two legs aren’t enough for many people.

Social Security provides some income, but it might not be enough.

If you work for the government, you probably have a pension. An estimated 84% of government workers are covered by a traditional pension plan.

In the private sector, however, just 4% of employees enjoy defined benefit pensions.

This means investments are an important part of your retirement. But like pensions, they may also be disappearing.

Stocks Will Offer Low Returns in the Future

Experts warn that investment returns will be low in the long term.

Jeremy Grantham is a well-known investment manager and market historian. He correctly forecast bear markets in Japan in 1989 and in the U.S. in 2000 and 2008.

Now, his model forecasts an after-inflation average loss of 1.5% a year for the next seven years.

John Hussman, another market historian with a long-term outlook, expects average losses of 1.7% a year over the next 12 years.

Those are precise models. Shown below, a simple chart based on history tells a similar story. 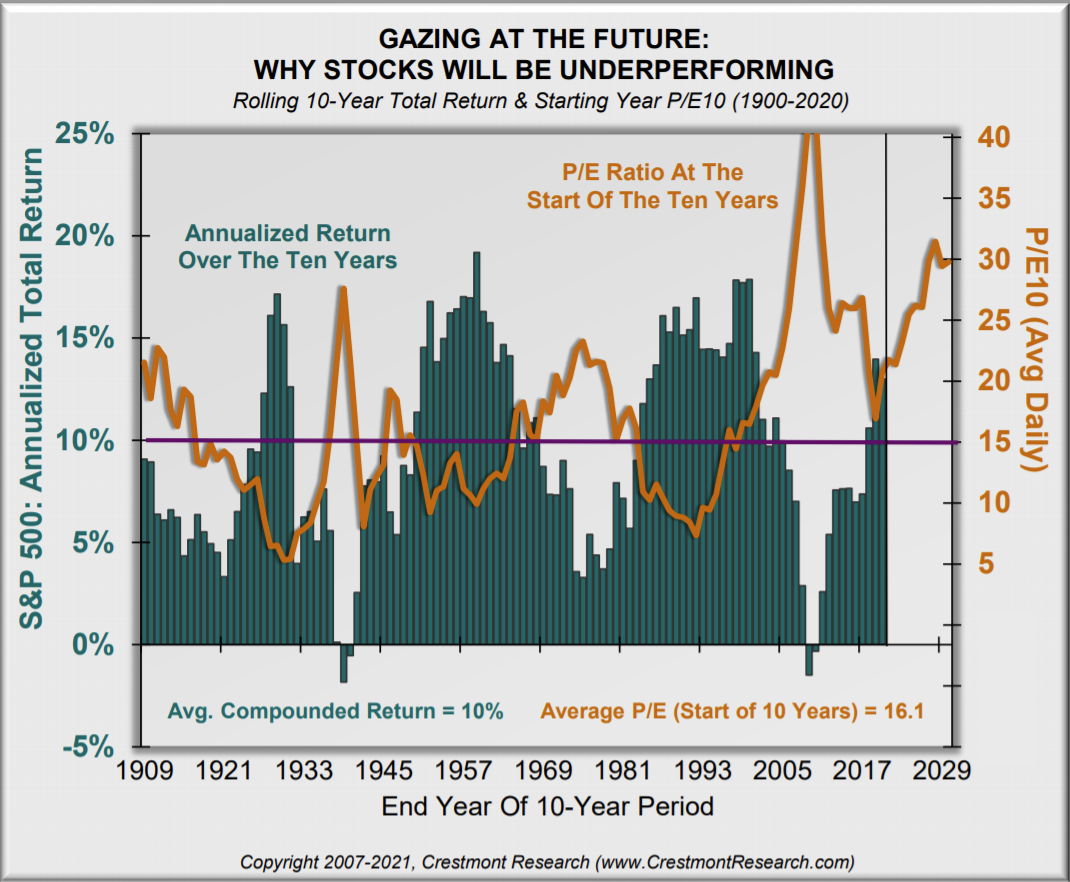 In this chart, a decade of low returns follows peaks in the price-to-earnings (P/E) ratio.

The current P/E ratio is at its second-highest reading ever. In the past, highs like this preceded negative returns over the next 10 years.

The third leg of the retirement planning stool is as unsteady as the other two.

Low long-term return forecasts are another piece of evidence telling us that the future will be challenging. Investment strategies that worked in the 1980s, for example, can’t be relied on in the 2020s.

So, if you expect to have a financially secure retirement, then you’ll need an alternative approach.