Big Up Days Are Actually Bearish

Big Up Days Are Actually Bearish

A few weeks ago, I mentioned that financial advisers are very good at telling you what you should have done 30 years ago.

After I shared the way to counter their advice, the stock market crashed.

Now advisers need different clichés. Fortunately for them, they have some ready to go.

In a bear market, advisers are saying things such as: “Focus on time in the market, not market timing.”

Putnam Investments supplements that wisdom with a chart showing how not owning stocks for just a few days means missing out on most of the market’s gains.

In its example, it shows missing stocks’ 10 best days results in half the gains of a buy-and-hold investor.

Missing the 30 best days in the last 15 years results in a loss instead of a gain.

But there’s more to the story.

And fully understanding the risks could help you avoid losing a lot of money.

Let’s look at the fourth-best day in the history of the Dow Jones Industrial Average.

It was the eighth time in history that the Dow gained at least 10% in one day. The chart below shows those eight times: 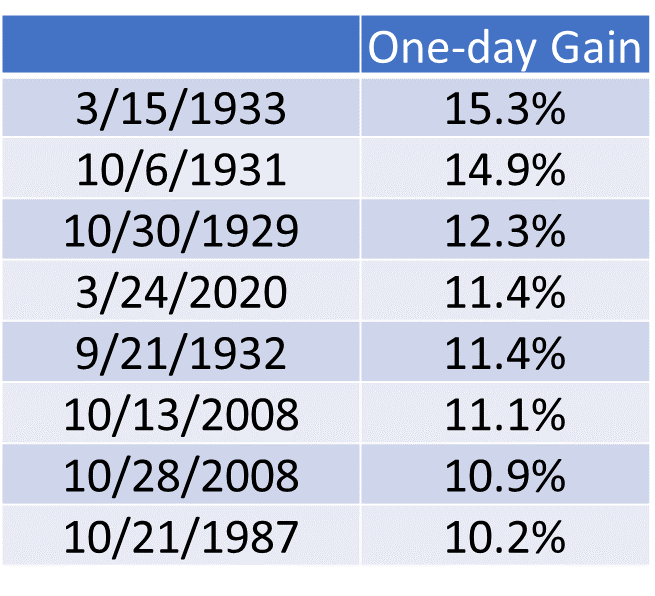 Looking at that table, I noticed all those days came in bear markets.

Four occurred in the Great Depression.

One came in 1987, just two days after the biggest one-day loss in history.

Avoiding the Bear Beats Focusing on Time in the Market

Instead of worrying about how to catch 10% gains in a bear market, a more useful question is whether those days marked the end of the bear market.

I broadened the test to include all days with a gain of at least 9%. That happened 17 times.

The Dow was in a bear market on 13 of those days, or more than three-quarters of the time.

The results show that bear markets don’t end with big up days.

On average, stocks continued lower for about six months after big up days.

The next chart shows the average performance of the Dow over the next year:

Using history as a guide, we know there’s a high probability the Dow will still be in a bear market 12-months from now.

Your Action to Take

It’s tempting to believe the bear market is over. But that’s unlikely.

Throughout history, large single-day gains never marked the end of the bear market.

Instead of buying now, it’s better to wait for the Dow to move at least 25% above its low.