Coronavirus remains in the news. Although the human toll i=of the virus is centered in China, the economic toll extends around the world.

Oil prices are one example of how the virus is affecting the global economy. The price of oil has been in a downtrend for some time as the chart below shows. Recent news adds to the bearish sentiment in the market and could push oil to multiyear lows. 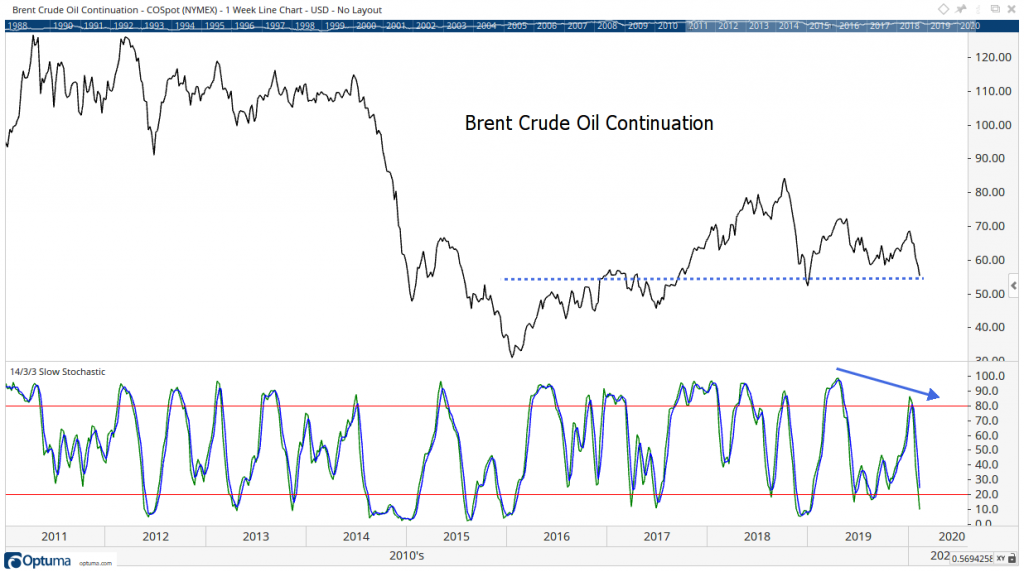 In the chart, momentum is moving lower which indicates a break of support is likely. The price of oil could break below $50 a barrel, and that could benefit one of the largest oil producing countries.

OPEC, the Organization of the Petroleum Exporting Countries, is not as influential as it was in the 1970s but the organization still influences oil prices. Noting that an economic slowdown in China will reduce demand for oil around the world, OPEC met to discuss cutting output.

According to The Wall Street Journal, “Delegates from the so-called OPEC-plus alliance are in Vienna for a technical meeting to discuss possible action following the coronavirus outbreak, according to the cartel officials.

The virus, which originated in China, has already contributed to a sharp decrease in demand for crude, driving oil prices to bear-market territory [recently].

One projection, which assumes the virus outbreak will be severe and last six months, suggests the market would be oversupplied by 1 million barrels a day in the second quarter if the cartel and its allies fail to act, the OPEC officials said.

To counteract this, the alliance would therefore have to cut output by 1 million barrels a day, but by no more than that.

The scenarios forecast demand growth being slashed by between 202,000 and 124,000 barrels a day for the full year, the officials said. Under either scenario of production cutting for the second quarter, OPEC is likely to ease its curbs later this year to avoid undersupplying markets.” [2]

While the objectives of the meeting are straightforward, the results were anything but straightforward. China’s economy is almost certain to be affected by the epidemic and that will affect the demand for oil. With demand down, prices will drop unless supply is also reduced. That simple economics.

But Russia did not agree with the plan to reduce output.

According to officials, “The Saudi proposal [to reduce output] had broad support, but the Russian delegation—which holds increasing sway within the group—rejected it on the grounds that it was too early to assess the impact of the virus on global oil demand, said Russian Energy Minister Alexander Novak. He said any action this week would be premature, Moscow’s news agency TASS reported.” [3]

The difference in opinion could be related to Russia’s desire to increase its influence in the region. Russia benefits from a lower cost of production than many OPEC countries. While it’s estimated Saudi Arabia needs oil prices of at least $60 a barrel to breakeven, Russia’s breakeven level is just $49.20. [4]

Russia could be using the negotiations to leverage its position in the Middle East where it has expanded its influence by working to resolve crises in Syria, Lebanon and Yemen. Using oil prices to increase influence would be a strategy that OPEC countries have long employed. What’s different now is that oil could be used as weapon against their interests.