Crude oil production in the U. S. soared over the past ten years because of hydraulic fracturing, an extraction method that is more commonly called fracking.

Fracking is the process of drilling down into the earth before a high-pressure water mixture is directed at the rock to release the gas inside. Water, sand and chemicals are injected into the rock at high pressure which allows the gas to flow out to the head of the well.

The process can be carried out vertically or, more commonly, by drilling horizontally to the rock layer, which can create new pathways to release gas or used to extend existing channels.

The term fracking refers to how the rock is fractured apart by the high-pressure mixture. [1]

This technology, combined with micro-seismic imaging, is sometimes “called a game changer for the global oil market. The peak oil hypothesis – the idea that global oil production will reach a maximum after which production steadily decreases – has thereby been dealt another blow, ignoring as it does the impact of higher oil prices in making more expensive oil extraction technologies profitable.” [2]

The impact of this revolution can be seen in the chart below which shows how the production of domestic oil has allowed the U. S. to reduce its reliance on imports. 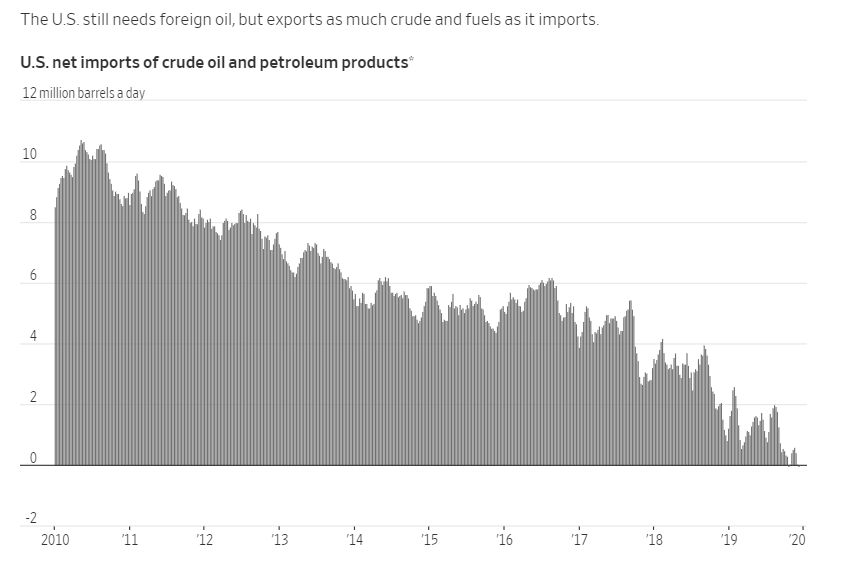 Lower oil prices have been a boom for U. S. consumers who benefited from lower transportation costs and lower utility expenses, among other benefits. But there is a risk in this boom.

Experts at the University of Pennsylvania’s Wharton School summarize the risk focused on the finances of the industry,

“Fracking is a business built on attracting ever-more gigantic amounts of capital investment, while promises of huge returns have yet to bear out,” says an introduction to Bethany McLean’s book [Saudi America: The Truth About Fracking and How It’s Changing the World.].

In fact, North American exploration and production companies saw their net debt balloon from $50 billion in 2005 to nearly $200 billion by 2015, according to a recent research paper by Amir Azar, fellow at Columbia University’s Center on Global Energy Policy.” [4]

Debt, in and of itself, isn’t a problem. The problem with debt is that there must be cash available to cover the costs of the servicing the debt. For the fracking industry, that is easier to do when oil prices are high.

Coronavirus is pushing oil prices as demand for oil decreases. 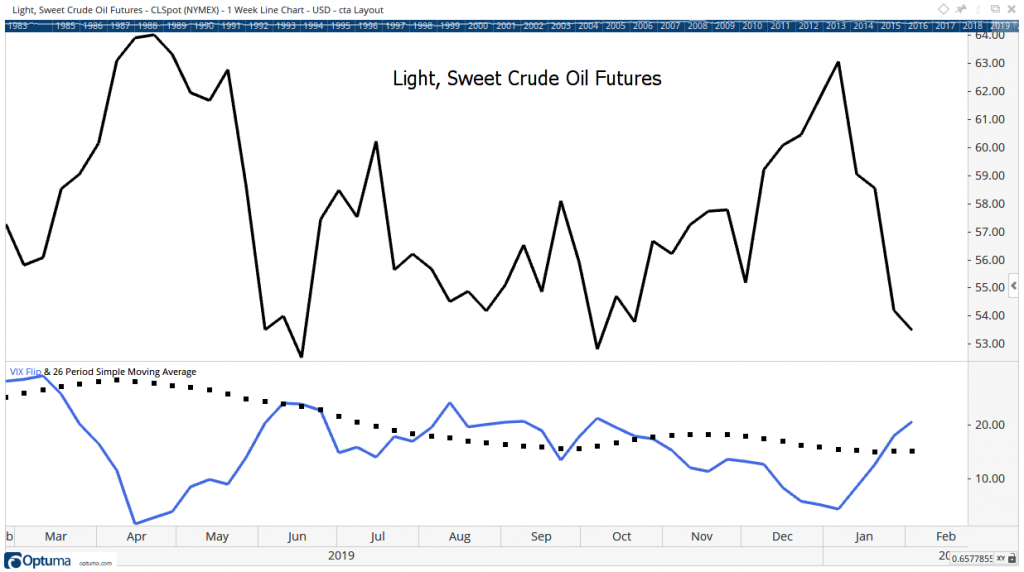 The chart shows prices are falling as fear is rising. Fear is shown in the indicator at the bottom of the chart which is known as the VIX Flip.

The VIX Flip measures the emotion of traders and shows whether fear is rising or falling.  In the chart above, the indicator is the solid blue line. You can calculate this line for any stock, ETF or anything that’s traded. That fixes the problem that VIX applies solely to the S&P 500.

The dashed line in the chart is a moving average (MA) of the indicator.

By adding an MA to the indicator, we can spot when emotions change. When the indicator moves above its MA, fear is rising. That’s time to sell.

With an MA and the VIX Flip, we have a complete trading strategy. We know when to sell in bear markets and when to buy after the decline ends.

This chart tells us that Coronavirus is threatening the bull market in stocks, the oil industry and the U. S. economy.

Lower prices can make it difficult to service debt and threaten the employment of thousands. The seeds of the next financial crisis could actually be in the oil fields of America.

[1]: What is fracking and why is it controversial? — https://www.bbc.com/news/uk-14432401 [2]: The U. S. Fracking Boom: Impacts on Global Oil Prices and OPEC — https://www.iaee.org/en/publications/newsletterdl.aspx?id=466 [3]: A Decade In Which Fracking Rocked the Oil World — https://www.wsj.com/articles/a-decade-in-which-fracking-rocked-the-oil-world-11576630807 [4]: Could Fracking Debt Set off Big Financial Tremors? — https://knowledge.wharton.upenn.edu/article/will-fracking-industry-debts-set-off-financial-tremors/
← Charts Show This Rally Is Likely to StallIs Tesla Worth $600 a Share? →