Charts Show This Rally Is Likely to Stall

Home » Charts Show This Rally Is Likely to Stall

Charts Show This Rally Is Likely to Stall

Price charts can be useful because they show emotions, or what the economist John Maynard Keynes called animal spirits. [1]

Keynes defined animal spirits as “a spontaneous urge to action rather than inaction, and not as the outcome of a weighted average of quantitative benefits multiplied by quantitative probabilities.” [2] In the past few days, the urge to act has led to selling.

The chart below shows the S&P 500 Index. The most recent action is the single vertical line at the right edge of the chart. Recent price action has been down, with prices dropping rapidly and breaking the trendline. 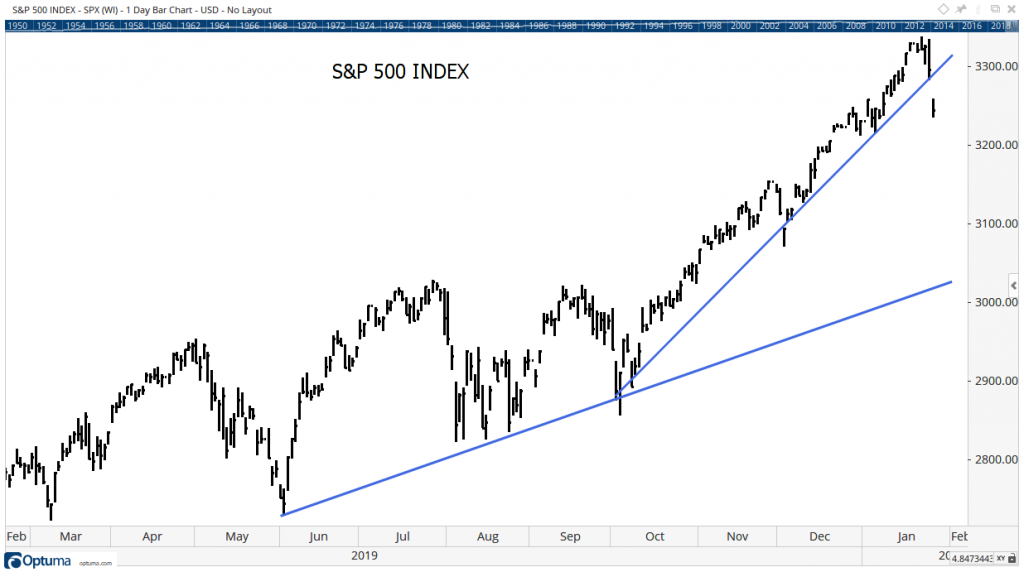 It’s important to note that this selling comes after investors acted on a strong urge to buy. The strength of the recent urge to buy can be seen in the slope of the trendline.

Trendlines connect points on a chart. While some technical analysts attribute strong forecasting powers to trendline, a more conservative approach is to simply assess the strength of the animal spirits with the slope of the trendline.

A steep slope is unsustainable. When buyers are rushing into stocks, buying without considering quantitative benefits, the trendline will be steep. At some point, buyers will paus, in effect collectively stepping back and saying “this is crazy” after a significant price increase.

In the chart above, the S&P 500 gained about 16% in just 17 weeks, the length of time marked by the steep trendline. This is an unsustainable pace of gains since prices cannot to gain about 1% a week indefinitely.

The acceleration of the trend was the warning that a significant price top is likely. The break of the trendline is the signal that the trend could be reversing. But the decline might not be important to many investors.

The weekly chart shows there could be a significant decline ahead. This doesn’t mean the bull market ended. It simply shows that a decline of 5-10% is likely.

On the weekly chart, three price lines are drawn from the November 2016 low. The first was steep and unsustainable. The second less steep and the third marks a sustainable advance. 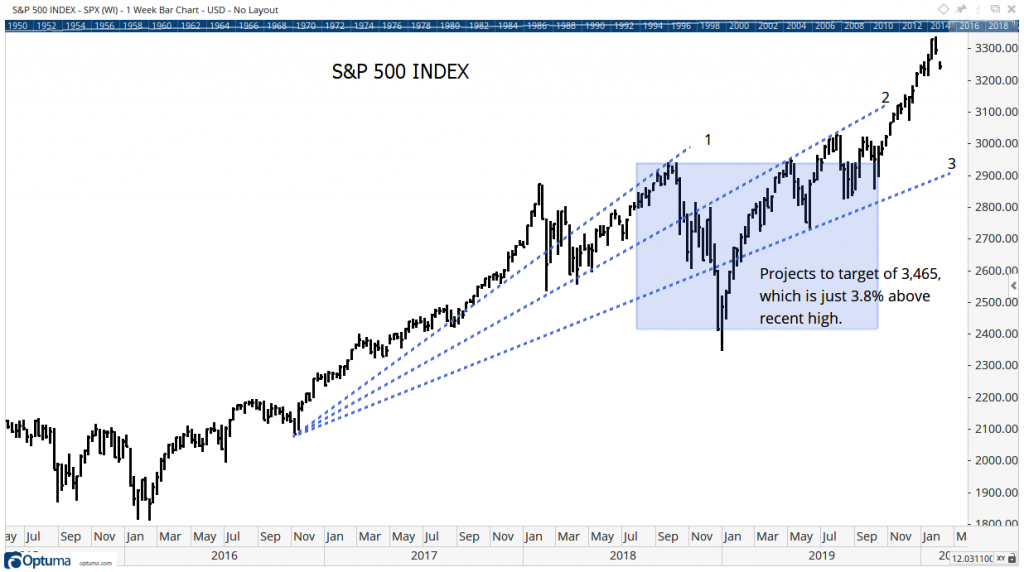 The chart also includes a blue rectangle that highlights a consolidation pattern that preceded the recent advance. This rectangle was the equivalent of a bear market in that it provided time for fundamentals to catch up the price gains.

Price targets can be found based on patterns using the principle of symmetry in the markets. That principle says that price moves tend to be symmetrical with the depth of the decline forecasting the extent of the subsequent rally.

Before pulling back, prices were less than 4% from the target. Recognizing that price targets are imprecise, a reversal within 5% of the target can be considered correct.

The chart also helps establish a downside target. Prices should pause at trendline number 3, or just below 3,000. That’s about 7.5% below the recent price.

Now, investors need to decide if this is something to act on.

It can help to think in terms of a stock. Imagine you know that a stock trading at $25 is about to fall to $23. After that, a new rally is likely. Would you sell that stock to avoid the $2 decline? Or, would you hold and add if it rallied at $23?

Selling on a pullback could create a tax bill that offsets the small loss avoidance. Most investors should probably hold until there is a more decisive trend reversal.

But that decision requires considering the “outcome of a weighted average of quantitative benefits multiplied by quantitative probabilities” instead of satisfying the urge to act. If prices continue to fall, there will be time to sell on a break below 3,000.

[1]: Animal Spirits [2]: EconomicsHelp.org
← How Traders Can Profit from What Few Know About the CoronavirusCoronavirus Threatens the Fracking Sector →