Why Japan Is Doomed and the United States Will Soar

Home » Why Japan Is Doomed and the United States Will Soar

Why Japan Is Doomed and the United States Will Soar

Japan provides an example of the latter. Japan’s population decline: corresponds to a weaker economy.

The chart below shows population growth of the United States (the red line) and Japan (the blue line). The population in Japan is decreasing and has been since 2010.

Stock prices are forward looking. Since investors knew about the decline in Japan’s population years in advance, the decline was reflected in stock prices long before it happened. The next chart shows that stock prices in Japan have been in a bear market for the past 30 years. 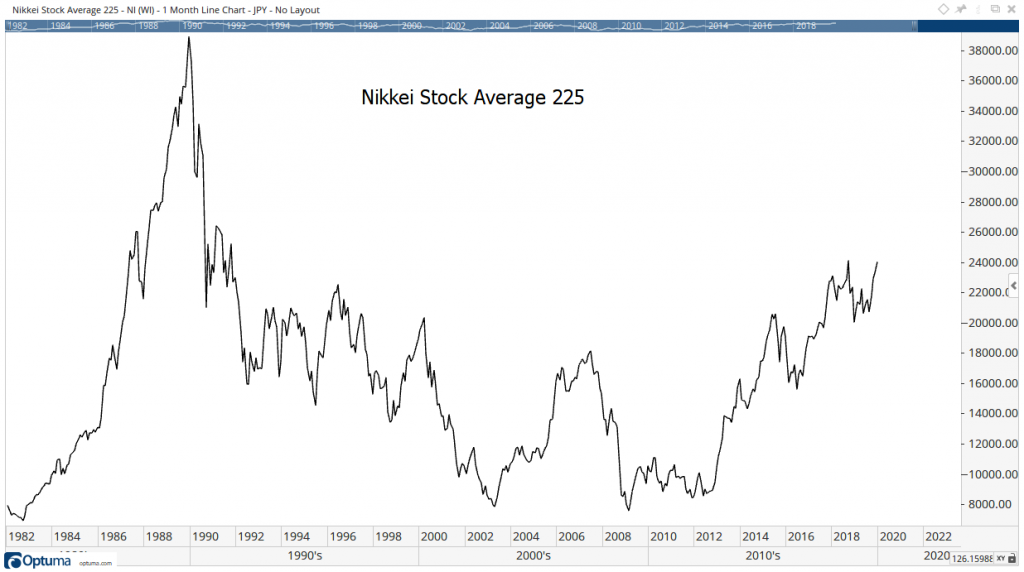 First, the chart dispels the myth that stocks are the best investment for the long run. Investors in Japan have suffered decades of declines or low returns. The same was true in the United States where decades of low returns followed market peaks in 1929 and 1966. U.S. investors suffered a lost decade in the early 2000s as well.

This indicates buy and hold strategies focused on the long term do not offer guaranteed returns.

Second, is the fact that demographics cannot be ignored. Japan’s demographic decline is one reason for the stock market’s performance.

Economic growth requires increased output and in general terms two factors explain the majority of any increase in output – people or technology. Without population growth, growth depends on improvements in technology and technology is a double-edged sword. While new technologies do create jobs, new technologies also destroy some jobs.

Looking Ahead for Investing Opportunities

Based on population growth, the future looks grim for Japan. The Japan’s population decline will continue and is expected to drop by a third by the turn of the century.

Meanwhile, the population of the United States is expected to increase by more than a third over that same time.

Looking beyond these two countries, population in Europe is expected to peak in 2025 and then decline by about one-third by the turn of the century.

Asia’s population is expected to peak near 2055 and end the century about 10% above the current level. Central America and South America are expected to show trends like Asia’s.

Demographics is just one potential source of economic growth, but it is an important one.

A 2010 study explains why population growth is important to investors [5]. In Economic Growth and Equity Investing, Bradford Cornell explained,

“…consider a hypothetical example of an economy for which technological innovation – and thus productivity growth – is zero but which is experiencing 5 percent population growth. Companies that provide goods and services in these economies will, on average, experience 5 percent growth in real revenues. Assuming that their margins remain constant, this rate translates into 5 percent growth in real earnings.”

Long run forecasts for population growth should then logically be factored into long run stock market expectations. Of course, Cornell’s example uses the economist’s assumption that “all other factors being equal” which is never the case.

Based solely on demographics, the U.S. is the most attractive developed economy in the world.

As developed economies, it is likely that technology will affect Japan, Europe and the U.S. in similar ways. That means the difference in population changes will provide more economic growth to the U.S.

For investors looking beyond the U.S., emerging markets should be considered, especially markets in Africa.