Wall Street’s analysts have three rules they tell every investor.

Build a diversified portfolio. Buy and hold for the long run. Invest in blue-chip companies.

But those rules don’t always work.

In fact, those rules led to large losses for most investors last month.

I ignored those rules … and my strategy made money last month.

A Different Way to Make Money in the Stock Market

I don’t diversify. I never focus on the long term. And I avoid blue-chip companies.

Instead of focusing on finding dozens of stocks to buy, I trade just one exchange-traded fund (ETF).

I only look at the short term. Over the last year, the average holding period of my trades in this strategy has been two days.

My goal is to capture large gains when the Dow moves. But I want to benefit from uptrends and downtrends. Long-term investors seek gains only in uptrends.

Below is a chart of my one-month performance. This “one trade” strategy and the Dow are both scaled to equal 100 in February for a direct comparison: 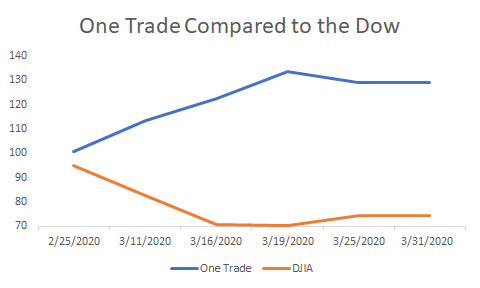 And these aren’t hypothetical results. It’s the approach I bring to my new One Trade service.

The “Master Code” Behind One Trade

To deliver gains in volatile markets, I look at how the market traded over the last 24 hours.

Then when I compare these moves to the last week or two of market activity, I can create an overall picture of the market.

That lets me know in advance with 75% accuracy or greater exactly where the market will be one week from today.

All told, I’ve built 40 rules into my tracking software that let me know where the market will open each day and where it will end up in one week.

These rules comprise a sort of “master code” — my magnum opus that contains my best secrets for crushing the market.

With these rules in hand, we had a great March.

And since the beginning of this year, I’ve been trading this strategy for charity using a special account that I’m personally funding.

This month, I got to send the first check to help dogs and cats waiting for permanent homes at Animal Friends Alliance.

I’ll be providing more details on my strategy in the coming weeks.

P.S. The stock market averages about 8% to 10% per year. This strategy made 30 times that much in one day. And considering you place the same trade on the same ticker symbol every time … it’s easy enough that anyone can do it. I’m still putting the finishing touches on everything, but if you’d like to get a first look at my new research before everyone else, click here now to reserve your spot. (It’s free.)